The Friends completed an official Burn Plan and held a controlled burn of the 5 acre prairie on April 9. The purpose is to burn off dead plant material from the previous year, and non prairie plants that have started to grow. The ash provides nutrients for the prairie grasses and wildflowers, which start growth later. The fire also damages or kills invasive shrubs. The goal is to restore native southern Ontario prairie ecosystem here, which is threatened and rare in the province. The burn will be held every 2 years.

The park was closed for the morning. A team of volunteers including 15 students from Niagara College Ecosystem Restoration program and their teacher Matt Smith, and Friends members, were led by Burn Boss Greg Eckhardt. Water containers were set out around the prairie. The fire was ignited on the upwind  or south end, and the breeze spread it north. The spread was assisted by volunteers raking plant material into the flames. A few times, the wind shifted but volunteers kept the flames contained, and by noon the entire west side was burned over. The east side was parti ally burned, because it was too wet in spots. The Fire Services visited, and was pleased with how well the burn had progressed.

A huge thanks from the Friends to Greg Eckhardt and his team, and to the Niagara College students! Now, we will be planting grasses and wildflowers in the burned area to enhance the prairie growth and provide habitat for pollinators, birds and wildlife. 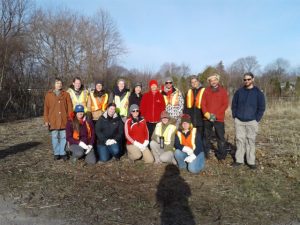 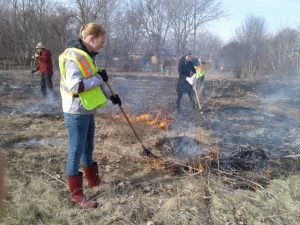 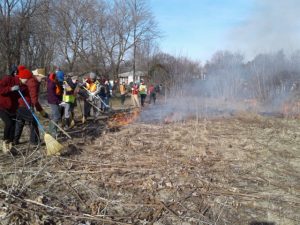